The Beauceron is a very smart and sensitive member of the Herding Class. This breed possesses the look and type of a well-balanced, solid, and powerful dog. They also have strong jaws, an agile body, having a dense, straight coat. Today the Beauceron serves the purpose of a protective house dog but in the past was related to as being among the best of herding dogs.

These dogs are very concentrated in the matter of listening to its owner’s commands and take great pride in mastering something totally new. They are a devoted breed, calm yet brave, particularly under the circumstances of protecting the family. The Beauceron is always prepared to please and also patient around children. These dogs score high on the subject of training ability, watchdog responsibility, and protection ability. 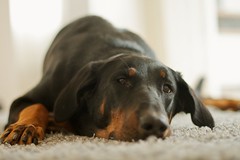 While the area of origin for this breed is France (going back to the 1500s), they are certainly not entirely a French breed. The Beauceron actually descends from the plains outside of Paris (the La Beauce). These dogs were mostly used as farm dogs – driving sheep, protecting cattle, and guarding the family.

The breed was actually known as one of the better herding dogs in France, but remained hidden from outside of the area. They became well-respected in the military as service dogs during the two world wars. Their tasks included following trails, detecting mines, and sticking to detailed instructions. The Beauceron Club of America was formed in 1980 and in 2001 the AKC officially acknowledged the breed as a member of the miscellaneous class. 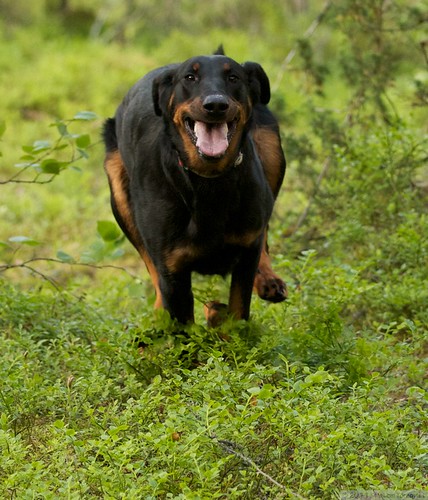 Care Requirements For The Beauceron

Taking good care of this energetic and very intelligent breed means lots of daily exercise and emotional stimulation. This is not the sort of dog that is happy sitting around the house all day. Without the proper level of stimulation, mental and physical, the Beauceron becomes easily bored and will act out in a destructive manner.

The Beauceron needs to have lots of time to spend outside the house in a large, fenced-in yard, but should sleep inside during the night with the family. They can withstand moderately cool and warm temperatures. Proper grooming requirements for the breed requires a light brushing once weekly to remove dead hairs.

The normal life expectancy of the Beauceron is between ten and twelve years. There aren’t any major health concerns in the breed. Minor health problems include gastric torsion and CHD. Veterinarians suggest that all Beauceron dogs get in particular tested for hip problems.